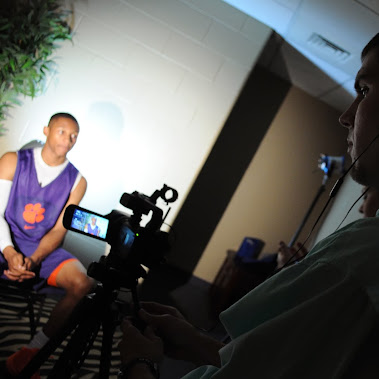 In case you missed hearing about the #GC340 basketball promotional video shoot during Fall 2013, I wanted to share some of the pictures from the location day. I really do love just about every aspect of film making, but probably the part of the process that I think is the most exciting, is the shoot day. Bring on the talent, the lights, the cameras, the microphones, and let’s see if we can make the magic happen! Yes, I admit there is a lot of planning that goes into those few short hours on set, but if all goes (mostly) well, then by the end of that time, you’ll have on film what it takes to edit your masterpiece.

I’ll admit, production day is not everyones favorite part of the process. It is a day of high tensions, lots of stress, and perhaps even more sit around and wait time than actual production time. As they used to say when I served as a production assistant on Hollywood features the motto of shoot days is “hurry up and wait!” Now from a producer or directors stand point, being there and ready ahead of the curve is not only important, but can mean the difference between having your shot and having no footage at all. So those moments of waiting may be painful, but they are completely necessary for a successful shoot day on location.

And we can’t forget to mention the importance of planning. As the #GC340 students mentioned throughout the video- making process and emphasized after The Godfreys screening, deliberate and purposeful planning is the single most important key to successfully capturing the footage necessary to edit your final video together. After a shoot wraps, especially when working with talent and on location, you can’t just realize during post-production that you missed a key shot. Most often, they simply can’t be recreated and then your edit is missing a key scene.